The circuit-breaker is mounted on a steel carriage, having four flanged wheels to facilitate location within the enclosure. A central screw mechanism operated by a removable handle is provided for raising and lowering the circuit-breaker.

The RPM-series LMVP circuit breaker has 3 separate dough moulded resin housings containing the three vacuum interrupters which are air insulated and separated by perspex phase barriers. Primary through bushings are also incorporated in the housing and at their upper end accommodate self-aligning multi-finger isolating contacts. Guide pins are fitted to the top plate to ensure correct location of the circuit breaker, and a copper contact provides positive earthing of the unit. The LMVP vacuum circuit breaker is interchangeable with the Reyrolle Switchgear LMT oil circuit breaker.

The housing has moulded inserts which provide accurate and simple location of components. The main operating shaft is coupled to the moving contacts of the interrupters through a drive insulator. Current transfer is through multi-laminated sliding contacts and the added contact load in the closed position is provided by disc springs.

Copper-chrome contact material is used in the interrupters to minimise contact erosion. The added contact load spring assembly gives indication that the erosion limit has been reached. 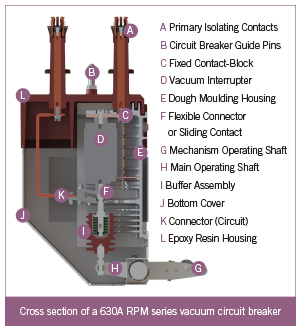 The circuit breakers have been type tested to mechanical endurance class M2 – IEC 62271-100.